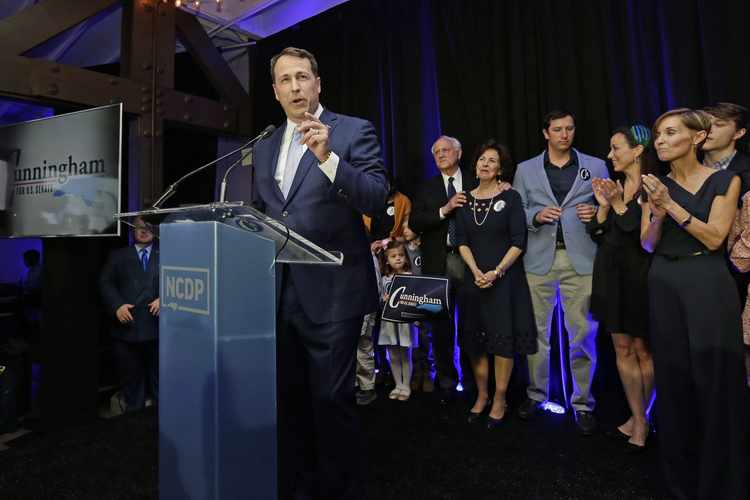 Cal Cunningham, the Democratic attorney and Iraq War veteran challenging North Carolina GOP Sen. Thom Tillis, broke his no-tax-increase pledge and voted for a $1 billion tax increase when he was in the state legislature in 2001.

Back then Cunningham said he agonized over the decision but defended his support for raising sales taxes and taxes on the state’s highest earners by calling it “the right thing to do.”

“We asked those who have benefited from the work of some very savvy tax lawyers to pay their fair share,” he told a local newspaper at the time.

“The issue for me is one of fairness,” he said. “. . . If it’s a tight year and we have to cut $377 million out of the state budget, then those who have benefited from loopholes should do their part.”

In his race for U.S. Senate nearly 20 years later, Cunningham no longer seems conflicted about supporting tax hikes, repeatedly arguing that corporations and the wealthy must pay their “fair share” to help the government provide numerous services, including cheaper health care and lower college costs.

When it comes to his own taxes, however, Cunningham has taken advantage of government programs to reduce his obligation.

From 2015 to 2019, Cunningham took nearly $40,000 in state tax credits for a $130,000 renovation to his home – a project that added a wet bar/butler’s pantry, expanded his master bedroom and replaced laminate with hardwood floors.

The state’s historic preservation office approved Cunningham’s application for the tax credits to defray $38,860 from the renovations to his three-bedroom, 3,074-square-foot Raleigh home. Redfin estimates the home, constructed in 1920 in the Cameron Park neighborhood just west of downtown, is worth $903,000.

From January 2018 to September 2019, Cunningham reported $439,016 in compensation for legal work and his position as vice president and general counsel for WasteZero, a Raleigh-based waste reduction company, according to the financial disclosure report he’s required to file when running for Senate.

The historic-renovation tax credits, available only to properties listed on the National Register of Historic Places, were used by 621 North Carolina taxpayers in 2015, according to the state revenue department.

Rachel Petri, Cunningham’s spokeswoman, did not respond directly to questions about whether Cunningham believes his decision to take the tax credits for home renovations is consistent with his belief that the wealthiest Americans should pay more in taxes.

“As you can see in the public record, Cal applied for the historic preservation tax credit and the state’s Historic Preservation Office approved the application for his work,” she told RealClearPolitics in an emailed statement.

Petri then defended Cunningham’s vote in 2001 to increase state taxes by $1 billion.

“Cal believes everyone should pay their fair share, and the budget you cite did exactly that to address an $800 million budget shortfall while also increasing teacher pay, establishing pre-K, and reducing class sizes,” she said.

The Senate contest in North Carolina, a presidential battleground, is one of the most competitive and closely watched in the nation because it could determine which party controls the chamber next year.

Cunningham and Tillis in recent weeks have engaged in a fierce debate over tax policy, with Tillis using Cunningham’s 2001 tax increase to cast him as a tax hiker who wouldn’t hesitate to raise taxes again in Washington.

In the U.S. Senate in 2017, with President Trump in office, Tillis voted in favor of the tax cut that lowered corporate tax rates permanently while providing only a temporary tax cut for individuals. Supply-side economists have credited the 2017 tax cuts with helping create the strongest economy in decades and the lowest unemployment rates in 50 years before the coronavirus’ devastating impact.

Similarly, while serving as North Carolina’s speaker of the House in 2013, Tillis and other Republicans lowered rates on individuals and corporations.

Petri then pointed to statements Tillis made while a state legislator supporting the historic preservation tax credits as a “positive thing for towns” and a “well-documented return on investment” while serving as in the North Carolina House of Representatives.

A spokesman for Tillis said his boss wasn’t in the legislature when this tax credit was created, and in 2014, when it was set to expire, deemed the tax benefits for renovating historic homes and buildings “inconsistent” with the principles of the landmark tax reform bill that he spearheaded in 2013.

“[That’s] why the North Carolina General Assembly let it lapse in the 2014 budget,” said Andrew Romeo, Tillis’ spokesman. “He certainly did not believe that it should be abused for luxury home improvement projects for the wealthy.”

(The tax credits Cunningham used for the home renovation expired at the beginning of 2015 – one day after he certified that his home-improvement project was completed. The state legislature has since passed new historic preservation tax credits worth only 15% in credit for non-income-producing private residences.)

Joseph Coletti, a senior fellow with the John Locke Foundation, a conservative think tank based in North Carolina, said his organization advocates for a much simpler tax code free of loopholes and tax credits – one that reduces the overall rate of everyone’s taxes so consumers have more purchasing power and businesses have more power to grow.

Still, stepping out of his role at the foundation and taking a populist line, he said he sees why the state legislature might want to provide a tax credit for those restoring old buildings that can then be turned into income-producing restaurants, retail stores or apartments.

The same principle, he said, does not apply when it comes to giving wealthy homeowners a tax cut on their home renovations, which he said would likely take place with or without the tax credit.

“What is the value that the [state] gets out of individual homeowners renovating their houses – and should it subsidize their choice of laminate flooring over hardwoods?” Coletti asked. “Government policies on taxes should raise money in the least invasive and least discriminatory way. When you reward someone for a certain behavior, you’re misusing the tax code, in my view.”

Correction: An earlier version of this story misstated the time frame for Cunningham’s referenced income of $439,016. That amount was for January 2018 to September 2019, not a single year.